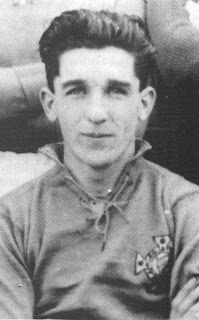 Eddie Carroll was one of many centre-forwards tried out by the Irish FA’s selection committee in the search for goals. He was given one chance only, failing to make an impact in a 3-0 defeat by Scotland...

Biography:
Eddie Carroll began his footballing career with hometown Junior club, Bessbrook Athletics. Later he played with Newry Town before making it to senior football with Glenavon where his "speed, dash and resource" guaranteed a continuous supply of goals and brought an international call-up in 1925 and reported interest from Cardiff City and Liverpool.

In a seventeen year senior career, Carroll is reckoned to have scored over 200 goals for his seven clubs, but undoubtedly his best times were with Dundalk where he scored 113 goals in three spells (47 League, 9 FAI Cup, 41 Shield and 16 Others) and still holds many club goalscoring records.

In 1925 Carroll joined Aberdeen. He failed to make much of an impact on the firstteam, scoring his only goal on the last of his five appearances in a 1-1 draw with Raith. He did however have much better luck in the Reserves, scoring an amazing 18 goals in a 4 game spell during the 1925/26 season and adding another six in three games at the beginning of the following campaign. Dundee United stepped in with a £500 bid and he marked his debut with a goal in a 2-1 defeat by Kilmarnock. He managed eleven goals in the 1926/27 season, including a hattrick against Hearts, one against Rangers in a 2-0 win and another in a 3-3 draw with Celtic in his final Scottish League game, though United were still relegated at the end of the season.

Carroll - "a dashing, trustful leader, with a good shooting boot" - twice represented the Free State League, scoring in a 4-3 win over the Welsh League and a 1-2 defeat by the Irish League.

Note: Eddie Carroll was one of a large family of footballers, his brother Frank most notable among them for his career with Belfast Celtic, Manchester City (18 Football League appearances 1920/21-1923/24), Newry Town (player-manager) and Dundee United (where he played alongside Eddie).

Anonymous said…
hi my grandfather was good but there is alot of talent among his great grandchrildren
Monday, March 29, 2010

Anonymous said…
he was my greatgrand father too but my cousin got the football talent but he is a boy and i am a girl i got the singing,dancing and acting.
Friday, June 04, 2010

Anonymous said…
This was my great grandfather and I just recently saw a team picture of him in 1925 when he played for N. Ireland.
Thursday, July 16, 2015

Anonymous said…
Eddie was my great grandfather and I just saw a team picture of him taking in 1925 when he played for Northern Ireland.
Thursday, July 16, 2015

Unknown said…
I was
told my grandad was a great footballer
Thursday, November 07, 2019

Unknown said…
I was always told about my grandad Eddie that he was a great footballer my mother told us story's about him.
Thursday, November 07, 2019