By jcd August 28, 2006
A legend in Irish League circles as well as in the brief history of the NASL, Billy Caskey had a long and often controversial footballing career...

Biography:
Having grown up as a Linfield supporter, when Billy Caskey signed for Glentoran from East Belfast few could have imagined the impact he would have at the Oval. A hard-working and courageous centre-forward, Caskey’s first season brought a return of 12 goals in 26 appearances, a City Cup Winner’s medal and the title of the Irish League’s Most Promising Newcomer. The next three seasons brought plenty more goals and a host of medals and the attentions of the wider footballing world. At the end of March 1978 Caskey took up the offer of playing in the NASL with Tulsa Roughnecks (were he was later joined by Glens teammate Vic Moreland), and he helped them to the Play-Offs in their first season as an NASL franchise.

Early in the 1978/79 season Caskey returned to Belfast, but it was to be a fleeting visit only as Derby County boss Tommy Doherty tabled a £90,000 joint bid for him and Moreland. The pair made their Football League debuts in a 2-1 home win over Southampton on the 23rd September 1978. Caskey hit a purple patch in front of goal in November, finding the net three times in a five game spell, and earning a call-up to the Northern Ireland team. He marked his international debut with a goal in a 2-0 win over Bulgaria on the 29th November, when once again he was joined on the field by another debutant, Vic Moreland.

Although his Derby and Northern Ireland careers never saw another goal, Caskey maintained his place in both sides through 1979. In the closing months of the 1979/80 season he returned to Tulsa, once again joined by Moreland. His remarkable consistency in the NASL brought 162 appearances (only Moreland appeared more times for Tulsa) and 37 goals (only two behind the franchise record). In 1983 he helped Tulsa to the Soccer Bowl, only to miss the final with a knee injury. Billy Bingham must have been keeping an eye on the NASL as he included Caskey, Moreland, Dave McCreery (also at Tulsa) and Jimmy Nicholl (then with Toronto Blizzard) in his initial squad for the 1982 World Cup, and Caskey won, what turned out to be, his final cap in a warm-up friendly defeat by France and didn’t make the final squad of 22.

With the NASL’s collapse, Caskey returned to Glentoran in 1984, this time to be joined by Terry Moore. By now a tough-tackling midfielder, he added the Irish Cup Winner’s medal which had previously eluded him to his collection following a replayed Final win over Linfield. In the summer of 1985 he was once again moved back to Tulsa Roughnecks, playing in a farewell series of exhibition matches. Signed by Dallas Sidekicks, where he once again featured alongside Moreland, in August 1985, he spent an impressive season in indoor soccer playing as the teams “enforcer”, helping them to the Play-Offs. His MISL career was brought to an ignominious end when he assaulted a referee during a game with Minnesota in August 1986 and he was banned for three seasons.


The prodigal son returned to Glentoran once again for the 1986/87 season, and he did not look a bit of his 32 years. In his first season back he helped the Glens t

o Irish Cup and Gold Cup successes, and followed that up with the League and Cup double the following season as well as the Northern Ireland PFA’s Player of the Year Award. Caskey also added Irish League representative honours to his collection, scoring in a 2-2 draw with the Football League in 1987. In 1990 he put in a Man of the Match performance in the Irish Cup Final defeat of Portadown, and played his eleventh and final game for the Irish League in the Centenary match against Manchester United. Finally in 1993, at the age of 38, Caskey ended his senior playing career. He had helped Glentoran to eighteen major honours whilst playing 442 games and scoring 110 goals over a nineteen year period. 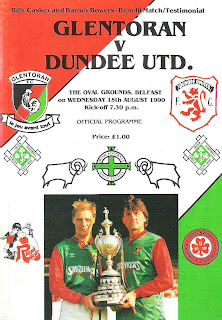 Caskey remained at the Oval as assistant-manager to Robert Strain, but was regarded as surplus to requirements when Strain was replaced by Tommy Cassidy in the summer of 1994. He returned to playing for a couple of seasons with Dundela then spells with Abbey Villa and Meadowbank took him past his fiftieth birthday! 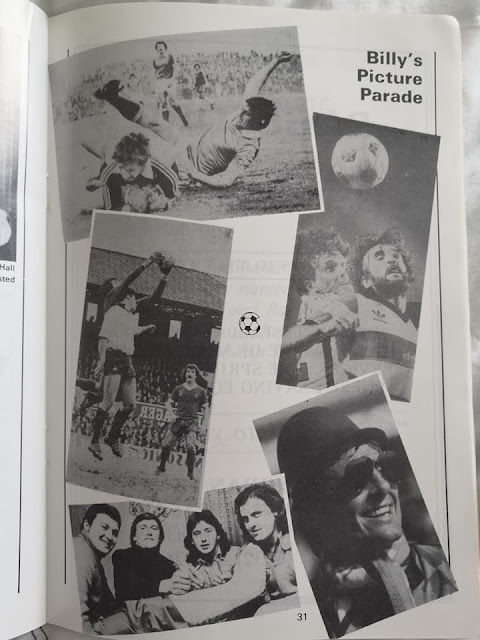 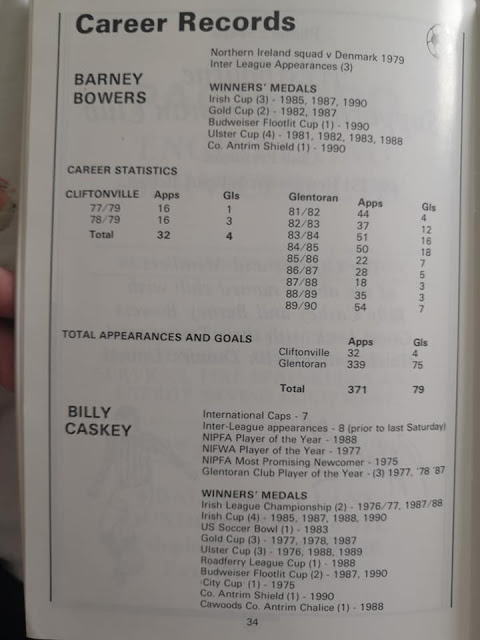 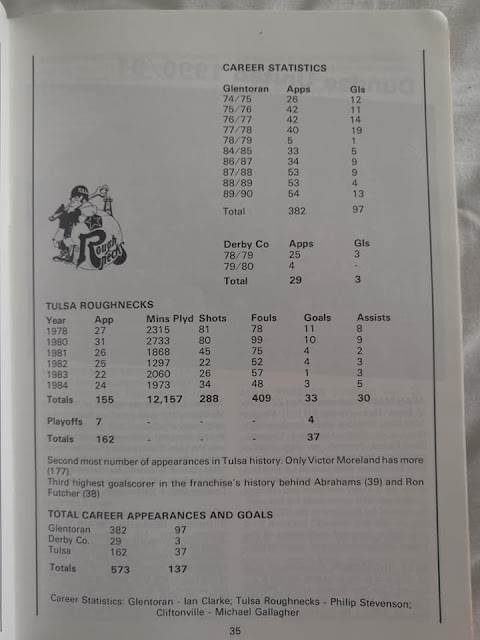 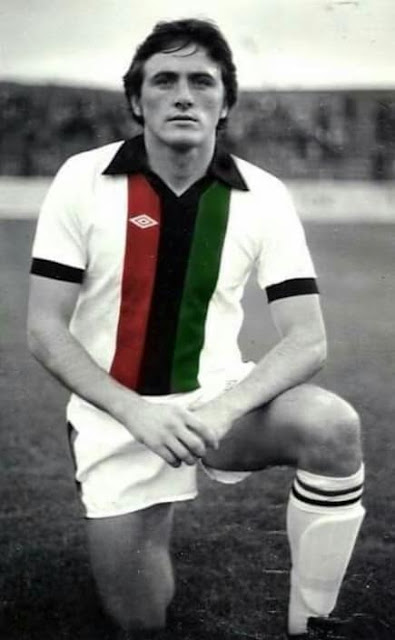 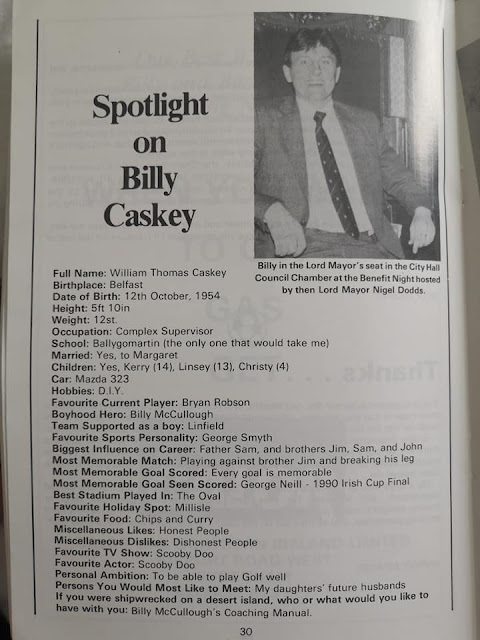 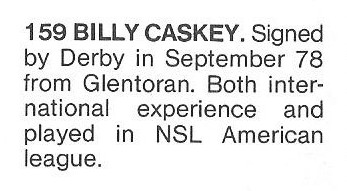