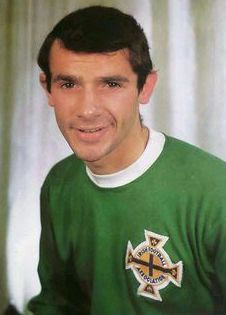 Biography:
A Shankill Road lad, Billy Campbell came through the Distillery ranks to make his first-team debut on 29th April 1961, still just 16 years-old. Although he remained very much on the fringe at Grosvenor Park over the next few seasons, he was capped at both Junior and Youth level, before establishing himself in the second-half of the 1962/63 season. Although he missed the Irish Cup Final defeat by Linfield, Campbell played a key role in the League decider against the Blues, scoring twice in a 4-2 win to clinch the Gibson Cup for Distillery for the first time in 57 years – and the last time to date.

The following season Distillery drew the Portuguese Champions Benfica in the first round of the European Cup. In the first leg, played at Windsor Park, Campbell played a key role, along with ex-England and Preston winger Tom Finney who guested for the Whites, in an historic match. Distillery twice took the lead, and then fought back from 3-2 down to draw 3-3. Unfortunately the second leg at the Stadium of Light brought a more expected result, Benfica running out 5-0 winners. The season ended with Campbell scoring the winner in a 2-1 County Antrim Shield Final victory over Glentoran. He also won his first Under-23 Caps, torturing the Wales full-back in a 3-3 draw, and finished with a season total of 15 goals.

In September 1964 Sunderland agreed a £7,000 fee for the 20 year-old Campbell’s signature. He made his League debut in a 3-0 First Division defeat by Sheffield United in November, and over the following two seasons he made just four further appearances. Although his impact at Roker Park was limited, Campbell did add a second Under-23 cap to his collection as the Irish were held 2-2 by Wales at Ninian Park in February 1965.

Campbell moved to Scotland in 1966, signing for Dundee. He soon became popular at Dens Park, and was dubbed, almost inevitably, “King Billy” by the fans. In 1967 he helped the club to the League Cup Final, losing out 5-3 to Celtic. In 1968 the club reached the Fairs Cup semi-final, where they lost 2-1 on aggregate to eventual winners, Leeds United.

Another impressive Northern Ireland Under-23 appearance and continued good form for his club convinced Billy Bingham that Campbell would be an able Full international. He made his debut on the right-wing in the famous 1-0 “hammering” of Scotland at Windsor Park when George Best, on the left-wing, tore the Scots apart. Two years later it was Campbell’s turn to be the star of the show, this time in a 4-1 win over Turkey in which he scored his only international goal. Such was his form that night that the Turks actually mistook Campbell for Best who had had a relatively quiet night on the opposite flank!

Within days of the Turkey match Campbell suffered a dislocated hip playing for Dundee a match against Hearts. It was an injury that meant he was never the same player, causing him pain for the remainder of his career and robbing him of "two-yards of pace". Mid-way through the 1969/70 season, Campbell signed for Motherwell in a £10,000 deal. Again at Fir Park, Campbell’s wing trickery endeared him to the support. It proved a lean spell for the club who were firmly rooted in mid-table of the Scottish First Division throughout Campbell’s four-and-a-half seasons on their books.

In March 1974, Campbell was appointed player-manager of Linfield. It was a move that the Blues would have welcomed four years earlier, had they not been outbid by Motherwell. Campbell spent a successful eighteen months at Windsor Park, leading them to the Irish League title in 1975. He impressed many at the club with his knowledge and professionalism, and it came as a shock when he resigned in October 1975 with reasons varying from a falling out with the board over player payments to the inability of his wife to settle in Belfast cited.

Campbell returned to Scotland, finishing his senior playing career with Hamilton Academical, making his debut on Boxing Day 1976 in a 1-0 win over Morton. But he made just two further appearances, scoring in a 2-1 defeat by Arbroath, and bowing out following a 1-1 draw with Dumbarton. He later played with Lossiemouth in the Scottish Highland League and was briefly coach at Motherwell.

Ken Garrett. said…
A lively, neat little winger who was also short sighted. On one notable occassion at Dundee he unfortunately played a lovely ball to a rather bemused ball boy!
Thursday, August 04, 2011