Biography:
‘Bud’ Aherne started his career with his hometown club, Limerick, scoring a rare goal in the 1938 Munster Cup Final. He served in the Irish army at Crosshaven during the Second World War years. Aherne came to the fore in the successful post-war Belfast Celtic side, stepping into the left-back position vacated by the legendary Bertie Fulton. At Celtic Park he won an Irish Cup Winners’ medal in 1947 and a League Title in 1948, the League’s first season after the war.

In the days when Irish players could be capped by either association on the island, Aherne's first Full international cap came for the FAI’s Eire (now the Republic of Ireland) team, in a 3-1 defeat by Portugal in June 1946. Three months later he won his first IFA (Northern Ireland) cap, against England at Windsor Park - though he had already won two Victory International caps against Scotland and Wales in February and May that year. 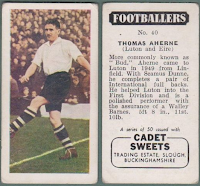 A £6,000 move to Luton Town in March 1949, shortly before Belfast Celtic’s resignation from the Irish League, saw Aherne re-establish himself in the FAI’s team after three years without an appearance. In November 1949, along with Con Martin, Reg Ryan and Dave Walsh, he featured in Eire's World Cup Qualifier against Sweden. In March 1950 the same four players featured for (Northern) Ireland in a Home Nations match against Wales which doubled as a World Cup Qualifier. This situation could not continue and the era of "dual internationals" was brought to an end.

Aherne's final international cap came as the Republic of Ireland lost 5-3 to France in October 1953. In total he had been capped 16 times by the FAI. Bud was a member of the famous southern Irish team that beat England at Goodison Park in 1949, the first time that England were defeated by a ‘foreign’ team on home soil. 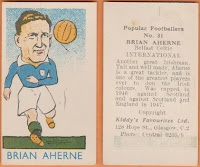 Despite the fact that he was already thirty when he joined Luton, he gave them many years of good service, helping them to promotion to the First Division in 1955. He was also noted for his effectiveness against the star winger of the day, Stanley Matthews, keeping him quiet each time they met.

Aherne played competitive football into his late thirties; in the end it was a hairline fracture of the angle that effectively ended his League career. On his retirement from first-team football he coached the Hatters' Youth Team, but for several years he continued to turn out for Luton Celtic. Even after his retirement, he never lost contact with his fans in his adopted Luton. He ran a very successful licensed premises in the town and was a regular visitor to his native Limerick.

Bud Aherne remained healthy and active until he was diagnosed with Alzheimer’s in the mid-1990s, and he passed away in December 1999.

'Bud' was central to soccer history