A colourful character both on and off the field, Malcolm Butler won a single cap immediately before the war, and served in the RAF before resuming his career...

Biography:
The story of Malcolm Butler's signing for Blackpool in 1935 was a tale to match a James Bond movie. Wanted by both Belfast Celtic and the Seasiders, the player was holed-up in a Bangor pub, where officials from both clubs arrived to find Butler had been locked in an upstairs bedroom by the landlord. The Blackpool officials crept up the stairs, completed the necessary forms, and escaped by way of the bedroom window, taking Butler with them. Not until a couple of hours later did the Belfast Celtic officials - their face red with impatience - learn what had happened.

At Blackpool Butler developed into a highly accomplished and versatile footballer, slotting into the team at half-back and forward as well as his recognised full-back position. From full-back he was noted as "a clever defender with a gift for converting danger into a counter-attack". He was selected for the only time for Ireland's match with Wales at Wrexham in 1939, but played in war-time matches, notably in a 4-2 win over the British Army.

During the war Butler served as a navigator with the RAF, and at one point was listed MIA during air operations in the Middle East. Thankfully he turned up safe and well and returned to Blackpool after hostilities had ended. By the time League football resumed for the 1946/47 Butler had dropped out of the first-team reckoning, and moved on to Accrington Stanley where he made 32 appearances in the 1947/48 season before retiring to become a licensee in Blackpool. 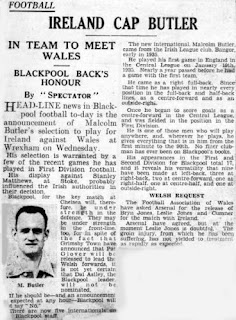