By jcd July 13, 2006
Next up is the scorer of perhaps the most famous goal in Northern Ireland's international history (sorry David), here's Gerry... 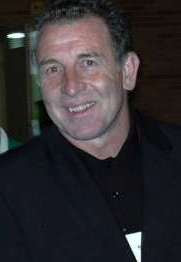 
Biography:
Gerry Armstrong came to football almost by accident; it was whilst serving a ban from Gaelic Football as a teenager that he tried his hand at soccer, playing for West Belfast side St Paul's Swifts and then Amateur League club Cromac Albion before signing for Irish League Bangor in August 1972 - all this despite picking up the laws of the game as he went along!

Having scored in the 1975 Co. Antrim Shield Final win over Glentoran and found the net a further nine times in the first three months of the 1975/76 season as Bangor moved towards a City Cup win, Tottenham manager Terry Neill was confident enough to offer his old club £15,000 for the 21-year-old Armstrong's services.

Armstrong had to bide his time in the Spurs reserve side, finally making his first-team bow in a 3-1 defeat at Ipswich in August 1976. In the next few seasons his form was erratic, and he often found himself selected in defence rather than in his favoured forward role - in fact, his highest League return in five seasons was just four goals.

On 27th April 1977 Armstrong made his international bow in a 5-0 defeat by West Germany, the first of 63 caps for Northern Ireland. Eight months later he scored his first international goals, as Danny Blanchflower’s men defeated Belgium 3-0 in a World Cup qualifier. He went on to appear in every game as Northern Ireland clinched the 1980 British Championships, their first since 1914.

It was a £250,000 move to Watford in November 1980 that really kick-started Gerry Armstrong’s career. He had always struggled with the short passing game favoured by Spurs, and had always shone more playing with Northern Ireland. The style of play of Graham Taylor’s Watford side more closely mirrored Billy Bingham's Northern Ireland side’s ‘direct’ approach - subsequently at Vicarage Road he played the best football of his club career. He made his debut for the Hornets in a 1-1 draw with Blackburn on November 20th, but had to wait until December 22nd, in a 3-0 win against Grimsby, to open his goalscoring account. He scored just three goals in 24 appearances that season, but the following year his return of seven goals in 33 appearances saw Watford clinch promotion to the First Division as runners-up.

Armstrong’s new found confidence also gave his international career a boost, he scored twice – in 1-0 wins over Portugal and Israel - in Northern Ireland’s successful 1982 World Cup qualifying campaign. Northern Ireland finished as runners-up behind Scotland, with an undefeated home record, and just one point ahead of Sweden. Armstrong’s goal in the final match against Israel had clinched the teams place in Spain.

The World Cup Finals in Spain saw Gerry Armstrong become a legend of the local game. His goal against Honduras in the second game of the first round earned Northern Ireland a 1-1 draw and meant that they needed to defeat the hosts to qualify for the second round. The Casanova Stadium in Valencia was a cauldron of noise and passion, as Spain also needed a win to guarantee qualification, but the Northern Ireland team rose to the occasion and when Billy Hamilton crossed the ball in to the penalty area, the Spanish ‘keeper Arconada could only palm it out and Armstrong hammered the ball home to give Northern Ireland an historic 1-0 win.

As it was both Spain and Northern Ireland qualified for the next phase. A 2-2 draw with Austria and a 4-1 defeat by France, with Armstrong scoring the consolation, sent the Ulstermen home after the second round. His performances in the tournament earned him the title British Player of Spain ‘82, this ahead of the cream of English and Scottish talent. Armstrong was also the competitions fifth equal top-scorer, only Italy's Paulo Rossi (6 goals), West Germany's Karl-Heinz Rummenigge (5), Brazil's Zico and Poland's Zbigniew Boniek (4 each) outscoring him.

The season that followed Armstrong’s World Cup heroics was to be ultimately disappointing, individually at least. He started just eight League games, plus eleven appearances from the bench, and scored just twice, as Watford finished as League runners-up to Liverpool.

In 1983 Spanish club Real Mallorca surprisingly signed Armstrong, and he spent two seasons using his shear power to terrify Spanish defences on a regular basis. In August 1985 he returned to the English First Division with West Bromwich Albion, but failed to settle there and spent the second half of the 1985/86 season with Third Division Chesterfield.

Despite this lack of success at club level Armstrong was involved in the 1986 World Cup squad, earning his final cap, as a substitute against Brazil, as Northern Ireland bowed out in the first round. His final international goal, his twelfth, had come almost two years earlier in a 2-1 World Cup qualifying defeat of Finland in November 1984. He had also scored in the 1-1 draw with Wales that had clinched the final British Championship for Northern Ireland in May 1984.

On his return from Mexico in 1986 Armstrong signed for Division Two side Brighton, making his debut at home to Portsmouth on 23rd August. He became player/coach at Brighton in 1988 and played a total of 55 League and Cup games. He left the Goldstone Ground under a cloud after an altercation with a fan and moved on to coach Crawley Town. He was manager of Worthing from 1991-1994 before being appointed as assistant manager to Bryan Hamilton in the Northern Ireland set-up.

Armstrong left his Northern Ireland role along with Hamilton in late 1997, and concentrated on TV work and radio punditry as well as coaching in and around his Sussex home. When the Northern Ireland job became vacant following the departure of Sammy McIlroy Armstrong applied. The IFA rejected him due to his lack of experience, but he did jump at the chance to take up the post of Lawrie Sanchez's assistant. Armstrong held the post of assistant-manager until August 2006, when he resigned for "business and personal reasons".

In August 2011 Armstrong was appointed by the Irish FA as Elite Player Mentor. The new role will see him keep in regular contact with young Northern Ireland players, ensuring that they are happy with how they are being treated within the youth set-up, and hopefully stemming the flow of players to the Republic of Ireland.

Whatever the future brings, Northern Ireland fans will forever remember John Motson's BBC commentary from THAT match in Valencia:

"Gerry Armstrong, what a worker he is... Striding away there with Hamilton to his right and Whiteside up on the far side of the area... Still Billy Hamilton, he's gone past Tendillo... Arconada... ARMSTRONG!"

Anonymous said…
One Of The Best Fooballers Around !
Wednesday, August 08, 2007