Johnny Dalrymple was a star of Distillery's "Cup Specialist" side of the 1920s...

Biography:
John Dalrymple made his Distillery debut as centre-forward on 23rd October 1920 in a match that was their last at the club's old Grosvenor Road home for seven years - they lost 3-1 to Linfield. The season was a disastrous one for Distillery as they finished bottom of the Irish League and exited the Irish Cup to intermediate club, Forth River. Dalrymple did provide one of the highlights, scoring both goals in the Charities Cup Final victory over Glentoran.

The 1921/22 brought an improvement in League form with Distillery finishing third. Dalrymple earned recognition from the IFA when he was included in an end-of-season tour of Norway. He led the line in both games, a 2-1 defeat in what is now regarded as an official international in Bergen, and he scored twice in a 3-1 representative match win in Oslo three days later.

Irish League representative honours came Dalrymple's way during the 1922/23 season when he made the first of seven appearances in a 5-1 defeat by the Football League. He played a total of seven inter-league matches at centre-forward, inside-right and on the right wing, scoring once in a 5-2 defeat by the Scottish League in 1926.

On the domestic front, Dalrymple's most successful season was in 1924/25 when he finished with both Irish Cup and Gold Cup winner's medals, scoring in the replayed final win over Queen's Island in the latter. Dalrymple played out his time with Distillery filling in at centre-half as well as in the forward line before joining his home-town club, Ballymena, in December 1929. In all he scored 5 hat-tricks for Distillery, the most memorable for him was in the 4-3 defeat of Belfast Celtic in a County Antrim match on the 12th December 1925.

Ballymena had been newly promoted to the league in 1928/29 and actually won the Irish Cup in their inaugural year. They already had a team of experienced players when Dalrymple joined them and he missed out on the Irish Cup Final in March 1930, when Linfield beat Ballymena 4-3. He however appeared at outside-right in March 1931 when they were again defeated by Linfield.

After a spell at Ballymena Intermediate side Summerfield he "returned" to Ballymena (by then Ballymena United) as trainer in 1935/36 season. He even managed to play in a few matches for the seniors, including a match against Larne in the City Cup on the 18th April 1936, scoring a goal. 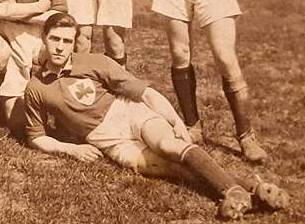