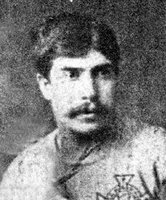 A star of the earliest days of football in Limavady, Orr Devine played in two Irish Cup Finals and four international matches, finishing on the winning side just once...


Biography:
Orr Devine played full-back for Limavady in consecutive Irish Cup Final defeats by Distillery in 1885 and 1886. In the latter of those two defeats Distillery supporters invaded the pitch and the Cup was actually withheld and the Distillery players went to court in order to receive their medals.

In 1886 Devine was also part of the Limavady team which toured England, and famously defeated Everton 1-0, an appearance which meant they had played at Anfield before Liverpool did!

Capped four times by Ireland, a Limavady club record, Devine most significantly starred in their first ever win, 4-1 against Wales in 1887.

Devine, who played a total of eight seasons, firstly with Limavady Wanderers (1882-1884) and then Limavady (1884-1890). All his games were played in the Irish Cup, North West Cup, Belfast Charities Cup or in friendlies.

By the turn of the century, Devine had left his native Limavady behind. On his death, at Stobhill Hospital in Glasgow in 1937, he was described as "one of the most outstanding players of his time [who] brought honour to his native town in the sporting world."

I think He also played vs Scotland in 1886

I think this must be Oliver.

Thanks for spotting the error. Devine did indeed play against Scotland in 1886. I had inadvertently credited him with playing against Wales on 27 February. Now rectified!