[Also published on NewsFour.ie. Links to more of Gavan's work can be found at the bottom of this article] 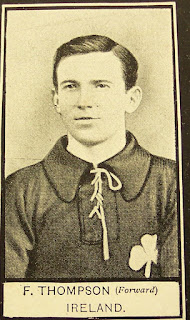 Frank Thompson was born in Ballynahinch, County Down on October 2nd 1885 and grew up to be brilliant at football. By the time he was nineteen he was playing at the top level of the game in Ireland.

He made his Irish League debut for the famous old Belfast club Cliftonville in 1905. He played in their last three matches of the 1904/05 season and from then on he was a regular in the Cliftonville team. In the 1905/06 season he was in fine form, playing 35 games and scoring seven goals for Cliftonville, who won the Irish League for the first time in their long history.

Frank continued to play extremely well for Cliftonville and he powered them into a highly successful era. Between 1906 and 1909 they won four more trophies, including two Irish Cups, and Frank's dynamic and exciting attacking play earned him a reputation as one of the best forwards in the country. He went on to have a particularly good year in 1909/10, when he scored ten goals in 31 matches to help Cliftonville win the Irish League again.

He played in the forward line at outside-left, and he was extremely effective in that position. He was a fast, determined attacker with a talent for running defenders ragged. Like any good winger his main job was to make goals for his side but he also managed to score a fair few goals of his own. Year after year, Frank was an amazingly consistent performer whose skill, verve and impudent trickery made him a hero to the supporters at Cliftonville's Solitude ground.

The fans loved him so much that some wrote rhymes about him, some of which have been preserved in the Cliftonville FC archive. An example from 1910 is quoted below:

"From the time the game commences, see him sleering through defences
you'll not style him an apprentice or a novice
He's no oaf however muddy, nor yet any kind of cuddy
But a lad who's made a study of his office”

Not long after that tribute was written, Frank left Cliftonville, having played 138 matches, scored 28 goals and won six trophies in his six seasons with the club. On November 25th 1910, he signed for Linfield.

Frank was terrific for Linfield from day one. In his first match he scored the equaliser against Glentoran and he played splendidly right through to Linfield's last match of the 1910/11 season, which was the Irish League championship playoff match against Glentoran.

That game took place on the 23rd of January 1911 and it went badly for Linfield early on. They were down 1-2 and the situation was looking grim before their dashing outside-left stepped up to save the day with a couple of goals to put Linfield 3-2 up. They didn't let it slip from then and won the match to become champions of Ireland. There was no doubt about who had made the difference for Linfield, as the Antrim Northern Whig made clear in its report, which said: “the hero of the game was undoubtedly Frank Thompson”

That outstanding performance came in Frank's last match as a Linfield player. He moved to the English First Division club, Bradford City, in February 1911. Frank instantly took to playing high class football in England and he was in top form as Bradford attained a creditable fifth place finish in the First Division. That League placing was certainly no mean feat, but the real excitement for City and Frank came in the FA Cup. 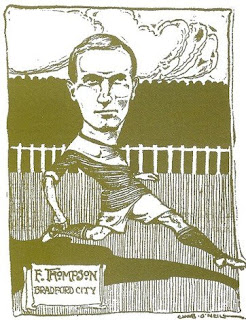 Bradford had never got past the Third Round of the FA Cup before Frank arrived. He helped them beat Grimsby Town 1-0 on February 25th 1911.With that result, City were into the Fourth Round at last!

Bradford won their Fourth Round match, beating Burnley 1-0 on March 11th 1911, thanks to a headed goal by Frank, and they were through to the FA Cup Semi-Final, against Blackburn Rovers on March 25th 1911. Frank scored again in the Semi-Final for Bradford who beat Blackburn 3-0 to secure their place in the 1911 FA Cup Final. where they would play Newcastle United, a top notch side who had won the Cup the season before.

The Cup Final was played at the famous Crystal Palace Exhibition Ground in Hyde Park in London on April 22nd 1911. During the Final Newcastle showed that they were not going to let go of the Cup without a fight, and they gave Bradford a right hard time of it from the first minute. City were well up for the battle, though, their midfield and defence was rock solid, and with Frank in such grand recent form their attack was always a threat to the Newcastle back line. However, the match was one in which neither team's forward line shone, and it finished 0-0 after extra-time.

That meant there had to be a Cup Final replay, which took place four days later on April 26th 1911 at Old Trafford in Manchester. The attendance for the replay was 66,646, which was the biggest ever crowd for a midweek match in England. Those spectators saw a match that was “an exhibition of hard, forthright tackling by both sides, in which the Bradford defence again performed heroically.” With Bradford under relentless pressure again from Newcastle, it seemed a long shot that Bradford would survive. But then, fifteen minutes into the game, Frank got forward down the right wing, went infield and found the space to play a perfect low pass into the box to put Bradford's centre-forward Spiers clear to score and make it 1-0. And they held on to the lead through to the final whistle. Bradford and Frank were FA Cup Champions!

The 1911 FA Cup was the eighth major trophy that Frank had won in six seasons. After that successful first season he continued to excel in English football, scoring 13 goals in 60 matches in his two years with Bradford.

Other articles by Gavan Bergin