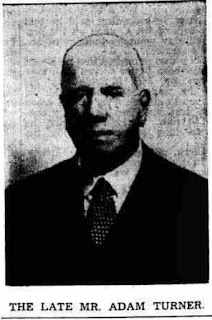 Biography:
"Addie" Turner was the son of the well-know Clifton Street undertaker, Adam Turner. As befitting a footballer of status in Belfast, young Addie signed for his local all-amateur club, Cliftonville as a forward. He was still a comparative youth when selected for Ireland's trip to face Wales at Wrexham. The Welsh were 4-0 up at half-time, and it was five by the time Turner scored a 70th minute consolation goal before the hosts rounded out the final score of 6-1.

On 23rd September 1899 Turner provided an open-top bus to the Kaffirs touring team from the Orange Free State to transport them up The Falls to face Belfast Celtic at their "Klondyke" ground. The tourists, dressed in bright orange shirts, were reportedly cheered and clapped along The Falls and responded by waving orange flags. Celtic won "an excellent match" 5-3. Turner spent some time in Scotland in the early 1900s, and it was there that he married and his first children were born before he returned to settle in the Ormeau district of Belfast. In 1936 he presented the trophy for the Jubilee Cup

Later Turner became more familiar in horse racing circles, owning a string of twenty horses which carried his colours to victory at meetings in all parts of Ireland. Indeed, in August 1939 it was after his return from a race meeting at Leopardstown in Dublin that he took ill suddenly and died a few days later.

At the time of his death, Turner was a director of A. & J. Turner Ltd, cartage contractors to the Belfast Corporation. A staunch unionist, he was a founder member of St. Polycarps Church of Ireland parish in 1932, located in Finaghy near his 43 Balmoral Avenue home. He was buried at the City Cemetery and survived by his wife, son and two daughters, another son predeceased him.

* These two caps have been credited to two different players by most modern sources, the first to Adam and the second to Edward. Adam Turner's obituaries mention that he in fact won two caps and no reliable details can be found regarding an Edward Turner. It is suggested that the nickname "Addie"/"Addy" likely becoming confused with "Eddie". We would welcome any feedback or clarification regarding either player.

Anonymous said…
A little bit more circumstantial evidence to back the idea that it was the same "Turner" who played against both Wales and England in 1896: the Glasgow Herald gives "E.Turner" as playing in both games and both times in the same inside right position (with Baird at outside right). There is no indication in the report of the England game that Turner is a new cap. Addie Turner being listed as "E.Turner" on both occasions does seem very likely.
Tuesday, May 04, 2021