Biography:
‘Jimmy Mac’ McAlinden was marked for stardom from an early age. A Schoolboy international, he was actually playing for Glentoran IIs when spotted by officials of Belfast Celtic, the club he had supported his whole life. In actual fact, McAlinden had grown up in the shadows of Paradise and jumped at the £2 weekly wage offered to him as a sixteen year-old. He quickly developed into one of the most effective players in the Irish League, playing in a deep-lying inside-right role.

Elisha Scott’s Celtic side were the dominant force in Irish League football in the years that preceded the War. McAlinden won a host of medals and although he missed out on the 1937 Irish Cup Final due to injury he made up for it the following year with the opening goal in a 2-0 Final replay win over Bangor. He also won representative honours, making his debut for the Irish League in a 3-2 defeat by the Scottish League in September 1937, and added a second Inter-League cap a month later in a 3-0 defeat by the Football League. In November he won the first of two caps collected while with Belfast Celtic in a 1-1 draw with Scotland.

McAlinden dedicated his life to football, training full-time throughout his time with Belfast Celtic, and it was little surprise that he was linked to a move across the water. Overtures were received from Huddersfield and Tottenham, but it was Portsmouth that stepped in with a record-breaking £7,500 bid in December 1938. Within six months of his arrival at Fratton Park McAlinden had an FA Cup winner’s medal courtesy of a surprise 4-1 Final win over Wolves.

Following the outbreak of the Second World War in September 1939 Portsmouth suspended the contracts of all of their players and McAlinden returned to Belfast and Celtic Park. He added two further Irish Cup medals to his collection in 1941 and 1944 (both thanks to wins over Linfield) as well as ‘War-Time’ League and ‘War-Time’ Gold Cup winner’s medals. He also spent a season with Shamrock Rovers prior to returning to Portsmouth, finishing as a runner-up in the FAI Cup Final at the hands of Drumcondra.

In June 1946 McAlinden, during a tour of Spain and Portugal, he was among the few Northern-born players to play for Eire. Come the resumption of the Home Nations Championship that September he won his third cap for Northern Ireland in a heavy defeat by England. Stoke City manager Bob McGrory saw McAlinden as the answer to the Potters’ troublesome inside-forward position, and forked out a club-record £8,000 for his signature in September 1947. He never settled at the Victoria Ground, and after a little over a year of inconsistent performances he was transferred to Division Three (South) Southend United.

Despite joining the Shrimpers when in the twilight of his career, McAlinden is still regarded as perhaps the club’s finest ever player. He was club-captain and penalty expert, his range of passing was beyond anything seen before or since at the club and he rejected a number of offers from other ‘larger’ clubs – “I would never move sideways” he claimed. In 1948 he won his fourth and final Northern Ireland cap, the first awarded to a post-War Southend player, in a 6-2 defeat by England.

By the early 1950s, in the veteran stage of his playing career, McAlinden began to look to the future. He took coaching courses at Loughborough College and in April 1954 he accepted the position of player-manager at Glenavon. In a memorable send-off from Southend, manager Harry Warren led the crowd in three cheers and loud applause as McAlinden left the field for the last time.

In over a decade in charge at Mourneview McAlinden oversaw a period of unprecedented Glenavon success. The ‘Double’ was won in 1956/57 and was added to by another League title in 1960 and two more Irish Cups in 1959 and 1961. Two Gold Cups, three Ulster Cups and three City Cups were also claimed prior to his surprise resignation in 1965. Through the mid and late 1960s McAlinden scouted Irish talent for Coventry City and Liverpool.

In February 1969 McAlinden made his management comeback with Distillery. Early inspiration brought the Whites to two Irish Cup Finals, where they lost to Ards in 1969 and defeated Derry City in 1972, before the ‘troubles’ placed the club in severe turmoil. With Distillery homeless and struggling for consistency McAlinden left in the summer of 1975. He was out of football for less than a year, taking charge of Drogheda United in early-1976. He once again proved inspirational at a small club with the Drogs reaching the 1976 FAI Cup Final, only to lose to Bohemians. They followed that up with semi-final appearances in 1977 and 1978 and third place finishes in the League in 1977, 1978 and 1979. 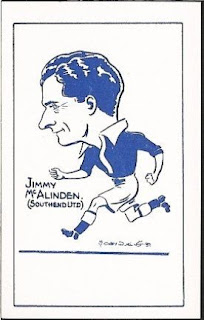 After retiring from football management in 1979 McAlinden concentrated on his golf, the game that had helped keep him calm throughout his career. He could look back on a long and successful time in football and the achievements of some of the talent he had helped to develop including the likes of Wilbur Cush, Sammy Wilson and Martin O’Neill.