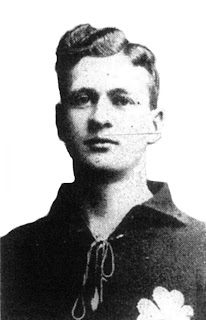 
Biography:
A two-footed forward, Alex Shannon learnt his football at Antrim Road Public Elementary School then Belfast Tech, where he won the Technical Schools Knock-Out Trophy. An enthusiastic goalscorer, capable in any of the inside-forward roles, with Cliftonville Strollers he tasted success in the Junior and Clarence Cups and represented the Amateur League against the Scottish Juvenile League when he was “not far removed from being the best player on view”.

Shannon’s progress continued as he was elevated to the Cliftonville Olympic side during the 1933/34 season and he finally established himself in the senior eleven during 1936/37. A player who could “manipulate the ball with the best of them”, Shannon was capable of opening defences with his passing and also possessed a “good shooting boot” when the opportunity arose. His “hustling tactics” having proved effective at Irish League level, Shannon was awarded two Amateur caps in his first campaign as Cliftonville’s recognised inside-left.

In the summer of 1937 Shannon left the Amateurs behind to accept a professional deal with Belfast Celtic, this despite reported interest from Liverpool. He joined a dominant Celtic side and faced stiff competition for a firstteam berth. Perhaps lacking the pace required to establish himself as a regular, he did manage to claim a Co. Antrim Shield winner’s medal following a 2-1 victory over Glentoran in April 1939.