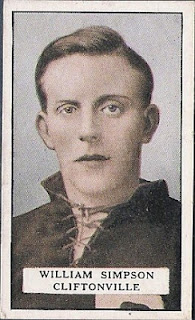 Biography:
William "Jocky" Simpson - nicknamed in honour of the famed Falkirk, Blackburn and England winger - was a regular "terror" at right-half for Cliftonville. A small but determined player, his knack of recovery made him a valuable asset to any side, Simpson played with Cliftonville Strollers and Olympic before establishing himself in the firstteam through the 1922/23 season. At intermediate level he claimed a Steel & Sons Cup winners medal as well as Intermediate League representative honours against the Lanarkshire League and Glasgow Junior League and a Junior Cap against Scotland all through the 1921/22 season. With the senior team his grit, tenacity and all-out 90 minute play aided the Reds to the Gold Cup in 1923 and an Irish Cup final appearance against Ards in 1927. Simpson was first selected for Amateur Ireland in an exhibition match against the Irish League played under the then new offside rules in May 1925. He won his only proper amateur cap against England six months later.

With thanks to Jim Murphy for forwarding the ISN profile on which this article is based.