Biography:
Sam Johnston made his name as a forward with Linfield, scoring 45 goals in 42 matches in his first two seasons. The only competitive matches played at this time were in the Irish Cup, English FA Cup, Charity Cup and County Antrim Shield. He proved a prolific scorer, even managing four goals in a 12-0 defeat of Oldpark in a Charity Cup match in 1889.

Johnston was one of four Linfield players to make ten appearances in the English Cup, scoring eight goals. These goals included strikes in a 4-0 win over Bolton in November 1888 and in a 3-1 win over Nottingham Forest in February 1889.

In the summer of 1890 Linfield signed two Army players, Bob Milne (a centre half) and Bob Hill at centre forward. Sam decided his prospects as a centre forward at Linfield were diminished and he duly signed for Distillery. He scored eight competitive goals for Distillery that season and before deciding to return to Linfield in the half-back line.

He went on to win three Irish Cup winner's medals and two League titles, and to add further Irish caps to his collection. His second spell at Linfield saw 55 appearances and seven goals, including three in a 7-0 win over Cliftonville in the 1894 Charity Cup semi-final. In April 1893 he played in the first inter-league match – a win over the Scottish League.

Johnston "retired" in 1897 but remained at Linfield to the end of 1899, helping with the reserves and turning out occasionally. He even managed to play for the 1st XI against Cliftonville in a City Cup match in December 1899. Shortly thereafter he left to become manager of Bangor. 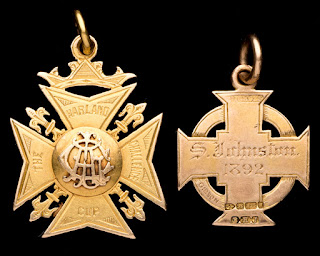